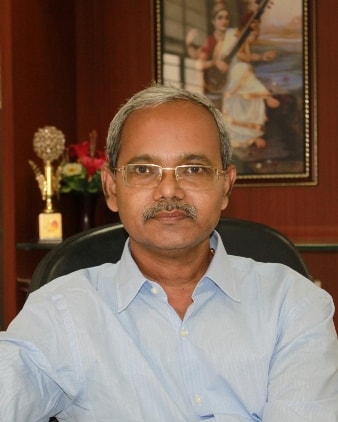 Vasireddy Vidya Sagar is a visionary with rich experience in the field of Academics and industry. A person who dares to dream big and commands the ability to make them come true. He has a Bachelor of Engineering degree from Bangalore University. He has over 20 years of experience in the field of Education. He is in the field of computer education since 1994 as a managing partner of Social Computers which has a franchisee of Aptech, a multinational company. It was one of the leading Computer Education Institutes in Coastal Andhra Pradesh for over a decade.

He was the Project Head for the prestigious project of Government of Andhra Pradesh 1000 computerisation project for Guntur, Prakasam and Nalgonda district zone imparting computer education for over 75000 students. The project was successfully completed in 2010. Further he has been heading similar projects of ICT@5000 and ICT@1300 schools computerization projects in GUNTUR district. Under this project more than 550 employees are working with more than 100000 school children being educated annually.
He is the managing trustee of Social Education trust under which an engineering college was started in the name of Vasireddy Venkatadari Institute of Technology, at Namburu village Pedakanani Mandal with the present students around 4000. Working with missionary zeal, he has effectively used his skills for the establishment of professional Educational Institutions that compare with the best in the state of Andhra Pradesh. The college is proudly ranked 2nd among the 470 odd colleges set up in the last decade in united Andhra Pradesh.

Having benefited from world class quality education from Sainik School Korukonda, he always felt that he owed a good school to the society. 21 years in the field of academics, and now, to provide formal world class education for children he started VIVA-The School by VVIT which is the first International School in the newly formed state of Andhra Pradesh.

He is the Proprietor of Social Computer Services, a Software Technology Park of India (STPI) registered Medical Transcription Unit, a pioneering enterprise in coastal Andhra Pradesh.

He is also the managing partner of Social Agro Industries, a cotton seed oil extraction and refinery which also help the students of Vasireddy Venkatadri Institute of Technology to get hands on experience of industrial atmosphere.

His innate business acumen and ethical business practices led him to succeed in all these highly competitive and pioneering efforts in varied fields.

He is an active social worker and played a prominent role in development of several Educational Institutions, temples, churches and Dargas. He is active member of round table, Honorary Chairman of Sri Tyagaraja Cultural Association, Guntur, Bharatiya Vidya Bhavan and other cultural organizations.